‘Voisin’: an original watercolour heightened with gouache of a Voisin C6 ‘Laboratoire’ and a Bugatti ‘Tank’ in a Grand Prix race.

Signed Geo Ham in pencil, and with gallery plaque to the reverse, dating its exhibition to 1922. Mounted with a double thick mount, framed with a honey-coloured lacquered frame, and glazed.

Notes: The Voisin C6 ‘Laboratoire’, as it became known, was designed as a rebellious reaction to the new rules imposed by the French Grand Prix officials declaring a minimum frontal area for racing cars.

Gabriel Voisin was quick to announce his inclusion in the 1923 Grand Prix, although this allowed him merely six months in which to design, construct, and test what would become the ‘Laboratoire’.This extraordinary car, with its aerodynamic shape and ultra-light aluminium chassis, mustered 75 bhp under the bonnet, a bizarre external airscrew to drive the water pump at speeds above 50kph, and an unusually shaped steering wheel, designed to permit the driver maximum visibility.

Despite all its technological prowess, the ‘Laboratoire’ failed to excel in the face of other, much more powerful racing cars at the time, (including the Bugatti Type 32 ‘Tank’ seen here in Hamel’s watercolour), managing just 5th place, at 63.2mph, and was to only race once more, making an appearance in the Monza later that year. This however, does not detract from its overtly modern concept and profile, making it very much a car ahead of its time. 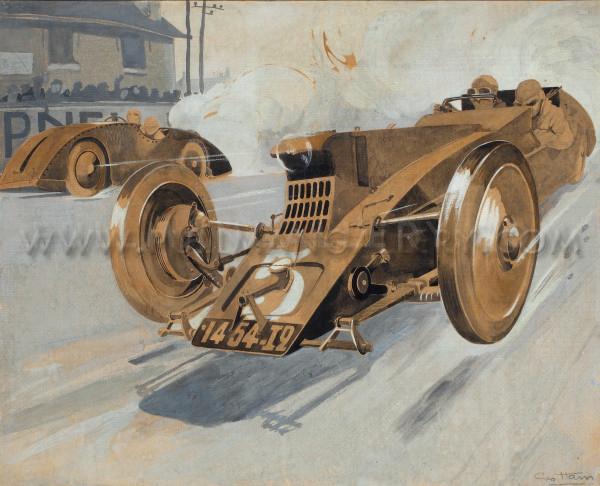