Finely detailed with correct livery, gilded brass propellers and rudder, glazed bridge with communications mast and the planked decks with metal grab rails, and complete with a suite of lifeboats. The model is mounted on four silvered columns and set within a glazed wooden case with engraved plaque.

Her Majesty’s Yacht Britannia, built by John Brown & Company of Clydebank was launched on 16th April 1953. Her maiden voyage was in 1954, when it sailed from Portsmouth to Grand Harbour, Malta with Prince Charles and Princess Anne on board, destined to meet The Queen and Prince Philip at the end of their Commonwealth Tour. The Queen embarked on Britannia for the first time on 1st May 1954.

In 1997, the sitting Conservative government committed to replacing the Royal Yacht should they be re-elected, arguing its diplomatic role in overseas trade alone justified the cost. However, following the election of the Labour government in May 1997, it was announced that the yacht was to be retired and no replacement would be built from the Treasury purse. Britannia was decommissioned on 11 December 1997 and is now a Museum ship permanently moored in Leith, Edinburgh boasting nearly 300,000 visitors per year. 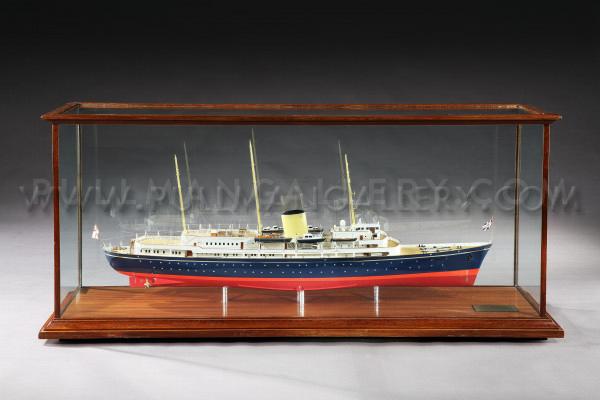