A highly important and unique 1:96 scale, 1913 shipbuilder’s model of the legendary German ocean liner launched by Kaiser Wilhelm II in May 1912. The hull is constructed of copper, with its original black paint, and has full internal lighting, visible through approximately 2,700 individual glazed portholes. The superstructure is heavily detailed, with lifeboats and all metal work is made of gilded (gold-plated) bronze. The exquisite and imposing model rests upon silvered-bronze supports, attached to a swept plinth bearing a descriptive plaque with the details of the vessel. The model has been entirely restored over the past 12 months by Britain’s foremost specialist artisans, and is presented in impeccable condition in a magnificent museum quality glazed display case resting on six ‘gun barrel’ legs.

The hand-etched plaque fitted to the case reads:

The luxury ocean liner ‘Imperator’ was built by Germany’s Hamburg Amerika Line (known as HAPAG), and was launched on May 23rd 1912 by Kaiser Wilhelm II. The Kaiser had taken enormous interest in the new vessel during its design and construction and was presented with a large silver model of the ship at the launching ceremony. He was so delighted with the completed ‘Imperator’ that he, in turn, gave the silver model to Dr. Albert Ballin, the director of HAPAG. At a massive 52,000 tonnes, the ‘Imperator’ dwarfed the nearest British rivals, ‘Mauretania’ (Cunard) and ‘Titanic’ (White Star), and boasted an indescribably sumptuous interior, including a swimming pool based on the slightly smaller one in the newly opened Royal Automobile Club in London. Her sea trials showed ‘Imperator’ to be rather unstable and top-heavy. HAPAG consequently carried out certain modifications, including reducing the height of the funnels by 9’ (2.7 metres). It is in this modified form – arguably an aesthetic improvement – that this superb shipyard model was constructed, thus dating the model’s manufacture to late 1913 or early 1914.

Upon the outbreak of hostilities in August 1914 and after only a handful of voyages, ‘Imperator’ was laid up in Hamburg and in 1919 was confiscated by the US Government. After a short period as U.S.S ‘Imperator’, spent repatriating American and Canadian troops, she was acquired on very favourable terms by Cunard, thus compensating them for the loss of their ‘Lusitania’ in 1915. She was then renamed ‘Berengaria’, after the wife of Richard the Lionheart. Following a complete refit, ‘Berengaria’ served as the largest and fastest Cunard liner, until the late 1930s, and was the favoured mode of transatlantic travel for Cunard’s top clientele, from the Prince of Wales to J.P. Morgan, to Cary Grant and Henry Ford. By the late 1930s, ‘Berengaria’ was becoming outdated by a new generation of vessels such as ‘Queen Mary’ and ‘Normandie’, and was sold for scrap in 1938. 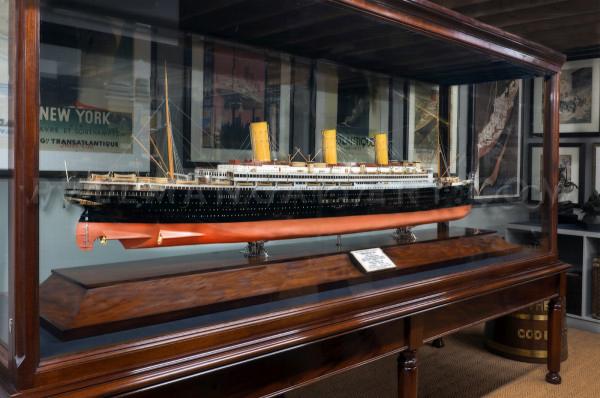 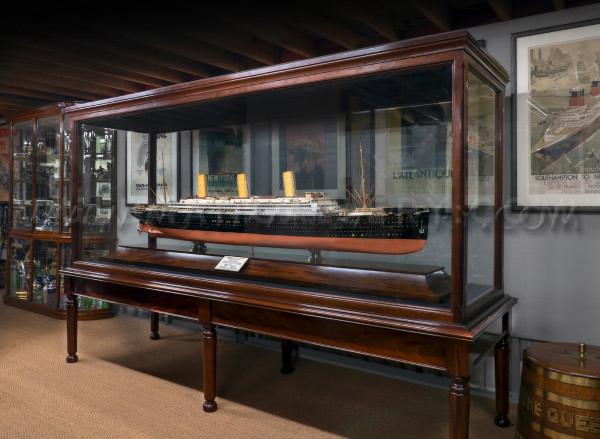 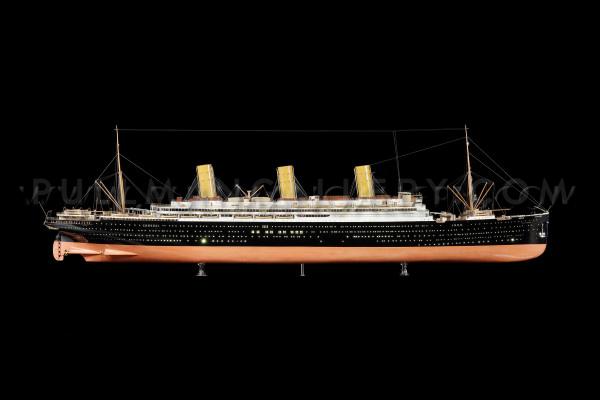