A highly important 20th century sporting bronze of notably original concept with a place in automotive history by Frederick Gordon Crosby (1886-1943), sculpted as a gift for ‘Sammy’ Davis.

Sydney Charles Houghton Davis (1897-1981), affectionately known as ‘Sammy’, was a ‘racing motorist’ of some attainment and Sports Editor of Autocar. It is above all for his long association with the weekly journal that he is chiefly remembered. Taking to the Brooklands banking in a ‘Mountain’ Handicap at the 1931 Easter meeting in a low-chassis ‘S’ Type Invicta, Davis was involved in a spectacular spill when the powerful 4.5-litre car overturned. The journalist was lucky to survive the experience without serious injury, or worse.

Frederick Gordon Crosby (1885-1943) made legitimate claim to being the foremost motoring artist of the inter-war years. No one of his generation has been more respected by his peers, nor has remained more influential in automobile art. A prolific and innovative illustrator, Crosby worked principally for Autocar and an enduring friendship developed between the two men. Crosby has been described as ‘splendidly three-dimensional’ and his gift to his old friend, confined to a hospital bed, captures so precisely the vintage race car at speed. The sporting model depicted, of indeterminate provenance, provided a subject for speculation (MG, Riley and even ERA influences were suggested) but – when the past is discussed – who ever agrees? Signed in the bronze: F Gordon Crosby, English, 1931. 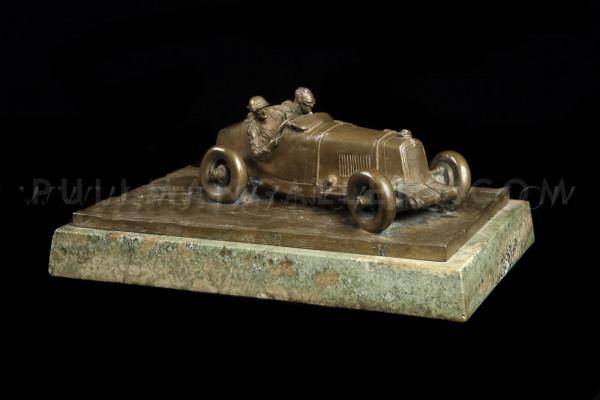