Original oil on canvas, signed and dated ‘Roy.a.Nockolds 1933’. Framed with a gesso frame with slip and unglazed.

During the 1920s and 30s there was intense international competition to achieve an ever higher world speed record on either racetrack or water. Kaye Ernest Donsky (1891-1981) known as ‘Kaye Don’, was a key player during the period, racing regularly at Brooklands and breaking a number of world records. The water-speed record challenges were no less competitive, and the American businessman and boat builder Gar Wood drove the water speed record up to 97 mph during the late 20’s.

Lord Wakefield, Chairman of Castrol Oil took up the challenge to achieve a British holder, and on Lake Windermere, Sir Henry Segrave raised the bar to 98 mph but suffered a fatal crash on his final run. Following this tragedy, Kaye Don and Gar Wood alternately nudged the record higher still. On Lake Garda in 1931 Don beat Gar Wood’s 102 mph record with a speed of 110 mph, which is the subject of this painting. Nockolds had painted a number of Kaye Don’s motor racing triumphs at Brooklands, from which point they became close friends. 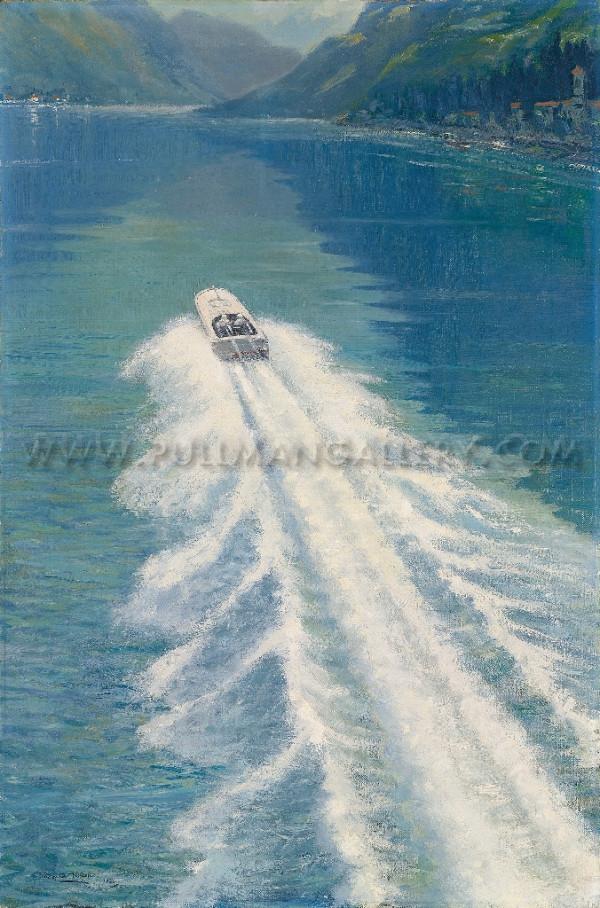