His contemporaries, Emile Gallé and the American, Louis Comfort Tiffany, worked predominantly in Art Glass, distinctive for its rich interplay of colour, botanic motifs and iridescence. These facets, although of great beauty, tended somewhat to disguise the medium of the glass itself. René Lalique, however, stood out from his contemporaries by being the ‘purist’, who applied his talent to the inherent merits of glass, and thereby elevated it to new heights of technical and artistic interpretation.

Lalique was born on 6th April 1860, in the small French town of Ay in the Marne region. While still an adolescent, he won several awards for his illustrations, and by 1890 had achieved an enviable degree of success as a silversmith, goldsmith, enameller, sculptor, designer and of course as a jeweller. It was in this latter field that he first gained world-wide renown, however, glass held the greatest fascination for Lalique and the advent of the 1930’s witnessed the period of his greatest commercial success.

Many truly astonishing items of glassware were produced, including a range of thirty glass car mascots, mainly of female nude or animalier form. By the early 1920’s, Lalique had shrewdly recognised the emerging vogue of automobiles de luxe, and offered its devotees his sensual mascots as the ultimate automotive adornment. Perfect examples of these mascots are today extremely rare and are amongst the most valuable of all Lalique’s work from this period – the Renard mascot, rarest of all the thirty models, has achieved at auction the remarkable price of almost USD 340,000, even in damaged/restored condition! Only a handful of perfect examples is known to exist.

During the golden years of the 1920’s and 1930’s, the world’s wealthiest and most discerning connoisseurs sought out Lalique to add his indefinable genius to their interiors. His patrons included Indian maharajahs, American billionaire industrialists, the great Hollywood stars and European nobility, as well as almost all of the surviving crown heads of Europe’s Royal Houses.

Of all the eulogies and posthumous praise heaped on Lalique after his death, one is most worthy of recounting here. One of Lalique’s greatest friends and lifelong patrons, the Armenian oil billionaire and collector Calouste Gulbenkian wrote…he ranks among the greatest figures in the history of art of all time. From Gulbenkian, whose art collection included works by Rubens, Rembrandt, Rodin and Gainsborough as well as some of the finest jewellery by Lalique – this was praise indeed.

The Evolution of the Car Mascot

From the earliest, pre-historic times, Mankind has chosen symbols of different kinds to bring him good luck, to ward off evil spirits, and to distinguish him from other men.

Mascots are symbols of this kind, and since ancient times, boats and other means of transport have been adorned with mascots of different types – the figure-head fitted to ships’ bows can be regarded as the direct forerunners of the automobile mascots of the 20th Century.

When the tomb of Tutankhamun was discovered in 1922, revealing the greatest archaeological treasure ever found, the attention of the entire world was inevitably captured. Among the many priceless objects discovered was the earliest-known mascot for a wheeled vehicle – the sun-crested, solid gold falcon mounted onto the Pharaoh’s golden chariot to guide him on his last journey to the next world. This was made over 3,000 years ago, and is the direct inspiration for many mascot designs of the 20th Century.

In 1911, the grandfather of the present Lord Montagu of Beaulieu commissioned the sculptor Charles Sykes to create the famous Rolls-Royce ‘Spirit of Ecstasy’ mascot, and the sheer artistic genius of this piece inspired other famous and eminent sculptors to create mascots of great beauty.

René Lalique, universally acknowledged as the French master jeweller and glass designer of the late 19th/early 20th Centuries, needs little introduction. From his origins as a designer of exotic and highly original jewellery in the 1880’s, through his sculptural and allegorical glass designs of the Art Nouveau and Art Deco periods, René Lalique constantly amazed and impressed the world.

The Golden Age of Motoring which saw the emergence of the grandes marques such as Delage and Bugatti, Rolls-Royce and Hispano-Suiza, and thus presented René Lalique with another opportunity for displaying his unique talents. These cars and other famous marques were lavish symbols of wealth, often distinguished by their own, highly individual mascots. The most famous of these, of course, was the Rolls-Royce ‘Spirit of Ecstasy’ sculpted by Charles Sykes, but even amidst such illustrious company Lalique was never to be outdone.

The status of owning a highly prized and uniquely designed Hispano- Suiza or Bentley was not enough for the fashion-conscious car owners of Lalique’s day. They desired style and panache, something more in keeping with their own sophisticated lifestyles. Lalique was able to satisfy this desire with a series of car mascots, which to this day remain unrivalled in design and execution.

Occasionally, Lalique’s mascots have been dismissed either as decorative whims, or artefacts for the indulgence of the rich. But to view them solely in that light is to ignore both their extraordinary artistry and uniqueness, no one could match Lalique in his innovative treatment of glass.

Of course the wealthy have often been loyal patrons of novel artistic and decorative forms, and in this respect the first four decades of the 20th Century were no exception, save for one important factor – style and chic counted for everything among the re-structured upper tiers of Western society. Lalique’s mascots aptly reflected this change of mood and accent on style and fashion.

The 1920’s and 1930’s saw great upheaval, change and innovation. The manufacturing industries had come into their own, the motor car had become a fact of life and aviation was now a reality. In the wake of these innovations came the infant ‘jet-setters’. The ranks of the privileged aristocracy were swelled by the industrial barons, the rich upper middle classes and the ‘nouveau riche’. On the fringes, this clique included celebrities drawn mainly from the world of fashion, theatre, arts and design. In London their haunts included Claridge’s, the Embassy Club, the Ritz and Savoy hotels. In Paris, the hotels ‘Le Bristol’ and ‘Le George V’ provided luxurious refuges. From summer until autumn its colourful coterie retreated to its playground in the south, the French Riviera or Biarritz on the Atlantic coast. Here their hosts, the Café de Paris in Monte Carlo) the Negresco in Nice, and the Carlton in Cannes provided entertainment in the form of wining and dining, gambling and cabaret. It was, in Noel Coward’s immortal words, all ‘cocktails and laughter but what comes after’. Indeed what? Well, if it was not romance, then a moonlight car drive offered an alternative attraction.

The motor car was the focal point of attention for this stylish and fashion-conscious set – by day or night. Grand Tours across the length and breadth of the continent, and France in particular, were much in vogue and in fact this era saw the birth of the concept of ‘Grande Tourism’. A rare and splendid sight would be to see a Hispano-Suiza or Rolls-Royce, embarked on such an exciting trip. Bedecked with walnut facia and silver-plated fixtures and fittings, a Lalique car mascot would be the ultimate but essential embellishment.

Apart from their highly collectable value today, Lalique’s mascots of course offer collectors a delightful insight into the 1920’s, be it as social, motoring or decorative history. In terms of design, they remain unsurpassed among mascots, and as purely decorative pieces, they stand the test of time extremely well and can be used as ‘objets d’art’ within most modern interiors, thus surviving as attractive objects in their own right. 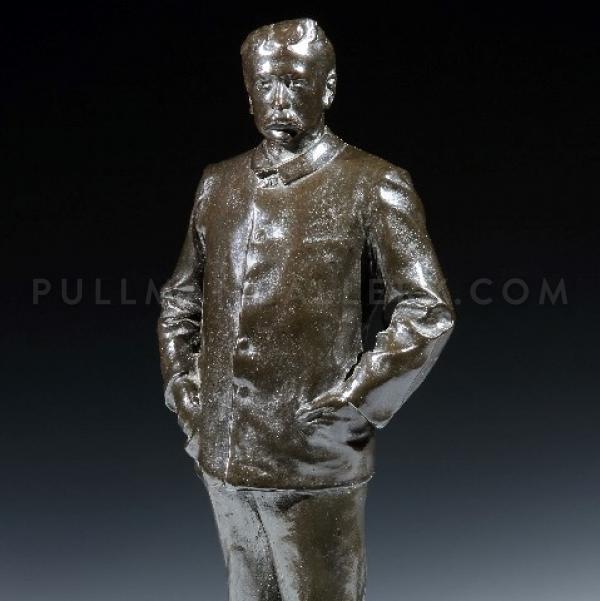 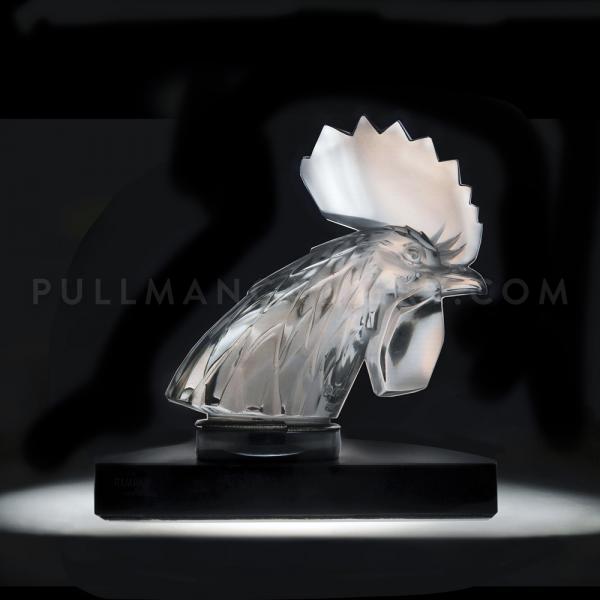 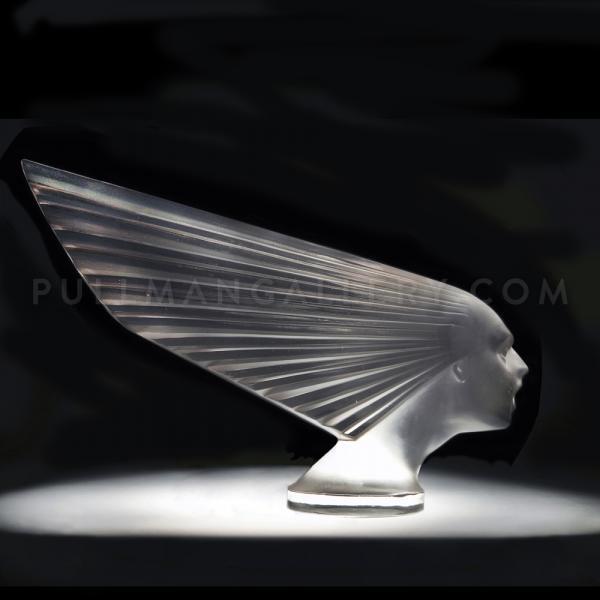 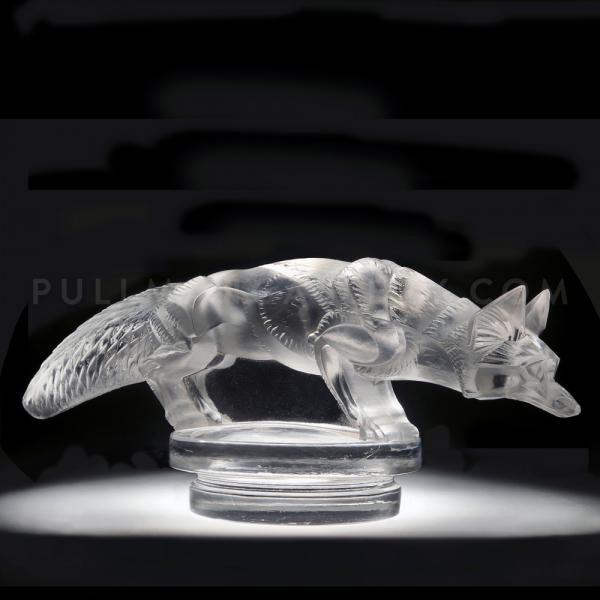 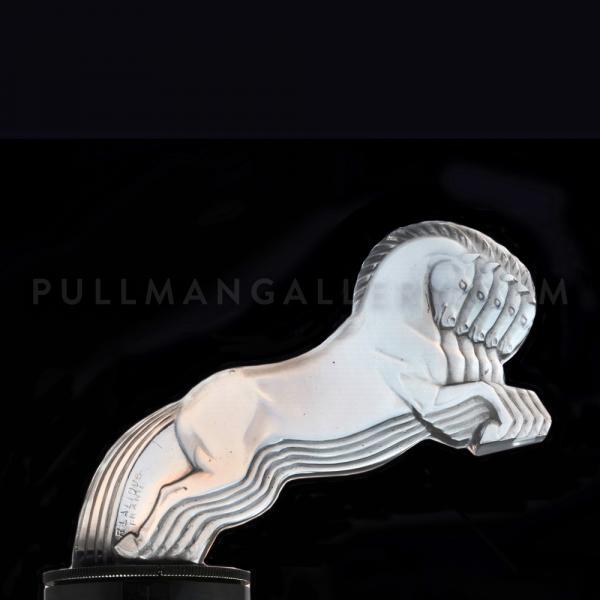