A fine, large original painting in watercolour and gouache, depicting the Maserati 250F driven by Jean Manuel Fangio, leading the Vanwall of British driver Tony Brooks at the old gas works hairpin on the Monaco circuit. Signed N A WATTS lower right, framed with a linen slip and a yellow gold leaf swept frame, and glazed. Executed in the early 1980s, the painting bears the original artist’s studio label to the reverse.

Acknowledged as one of the most significant races in Grand Prix history, the 1957 Monaco event, began overshadowed by the deaths three days before at the Mille Miglia of drivers Alfonso de Portago and Edmond Nelson. The Monaco race was also not without its drama, as in lap four a collision involving Stirling Moss, Mike Hawthorn, Peter Collins and Tony Brooks, narrowly avoided tragedy. Brooks, the only driver involved in the crash able to continue the race, battled fearlessly against the unstoppable Juan Manuel Fangio, the ultimate victor, who took the chequered flag in one of the greatest battles of Formula 1. 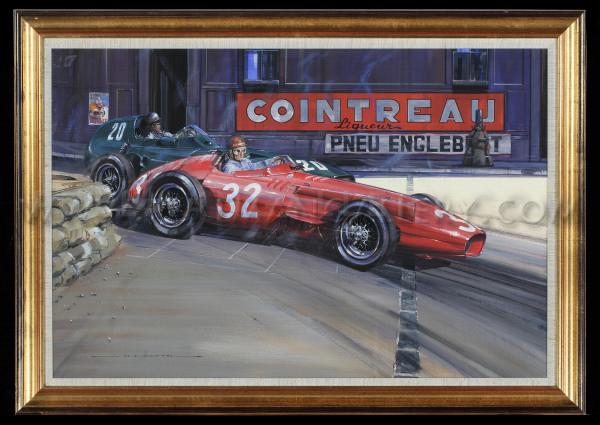 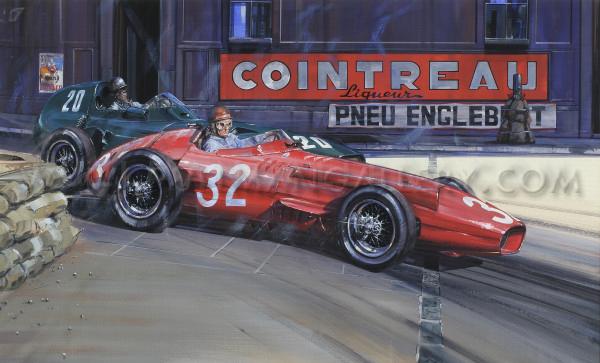