A very large and impressive 8–day mantel clock, with ornate polished marquetry detailing commemorating the round the world flight of the Graf Zeppelin LZ-127 in 1929. Of ‘Napoleon’ shape, the dial in the form of a map of the northern hemisphere, the pierced chrome hands with Zeppelin tip (minute hand) and star (hour hand).

Above the dial the head and shoulders of the Captain Dr. Eckner, set within a wreath design flanked by palm fronds. The outline of the LZ-127 can be seen below, and to the left is a scene of the Airship hangers located at Friedrichshafen.

Dr Hugo Eckener (1868-1954) directed the Zeppelin company after the death of its founder in 1917, and navigated the Graf Zeppelin on its global circumnavigation in 1929, after which he was treated as a celebrity in weimar Germany. A fervent anti-Nazi, his political views led to him being declared persona non grata by Adolf Hitler in 1933. 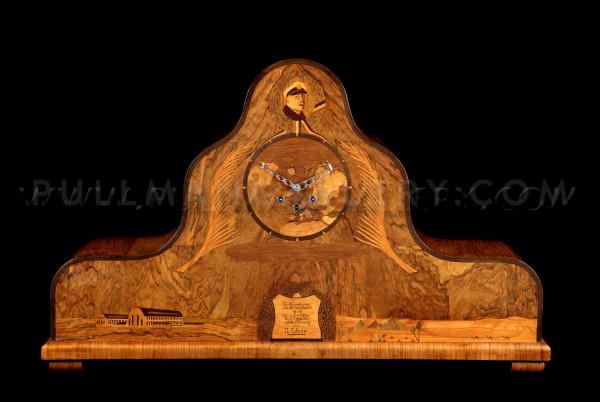