An original charcoal drawing heightened with gouache, depicting Achille Varzi on the way to victory in the 1930 Targa Florio, driving his Alfa-Romeo P2, number 30. Mounted, framed and glazed.

This drawing was first commissioned for publication in the May 1930 issue of The Autocar, and featured for a second time in March, 1961. The rear of the drawing bears an Autocar stamp, and has a number of handwritten sizing and editorial notes. Formerly the property of Autocar artist Gordon Horner, who worked for the magazine from 1946-1980.

Achille Varzi, ‘a young and fiery’ Piedmontese had been a successful motorcycle racer, competing in the Isle of Man TT no fewer than seven times, before switching to racing cars in 1928. Originally with Bugatti, he changed to Alfa-Romeo with whom he won Italy’s racing championship in 1930, followed by his important victory in the Targa Florio, as depicted in this fine work by Crosby.

Not only did he defeat the favourite, Louis Chiron driving for Bugatti, but also outgunned Alfa-Romeo legends Guiseppe Campari and Tazio Nuvolari. Varzi’s Alfa-Romeo P2 dated from 1924 and had been much modified, including the flat radiator. Interestingly, it is the very car in which Campari triumphed at Lyon in 1924.

It was a dramatic race, in which Varzi triumphed despite his car catching fire, being extinguished by his riding mechanic, who beat out the flames with a seat cushion whilst Varzi drove on! He survived morphine addiction, a complicated love life and the war, and made a remarkable comeback in 1946, only to perish during practice for the 1946 Swiss Grand Prix in his Alfa-Romeo 158. 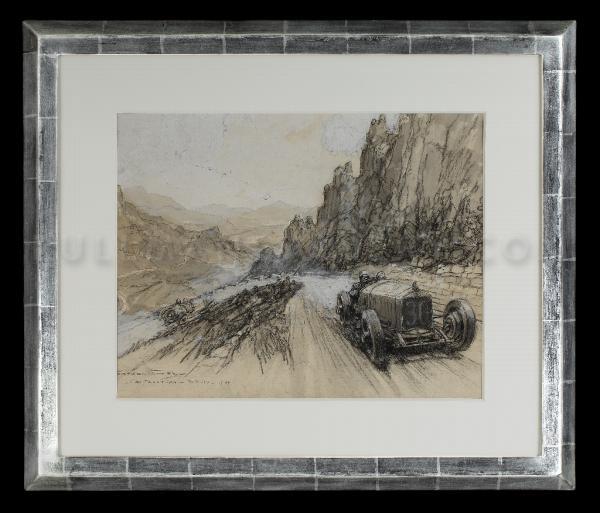 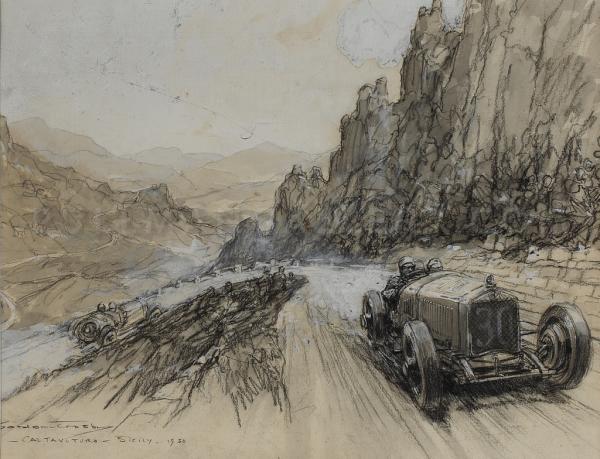