Frederich A Dahme (American, early 20th Century): “Outwitted”, a large allegorical painting depicting the Graf Zeppelin flying effortlessly above the stormy Atlantic Ocean, the “clouds” being dispersed in her wake and Neptune, depicted floundering in the waves, powerless to impede her progress. Signed and dated 1929.

Note: Frederich Dahme was an American artist, illustrator and cartoon animator active in the period 1910 – 1940. He also specialized in portraiture, often of historical subjects (Gutenberg, George Washington, and others) and is well-known for his remarkable avant-garde animation work for a short movie “Danse Macabre” in 1924. “Outwitted” was almost certainly a special commission and we understand it may have been illustrated in “Saturday Evening Post” magazine in 1929, as part of the media frenzy surrounding Graf Zeppelin’s circumnavigation of the globe: the first time by any sort of aircraft. 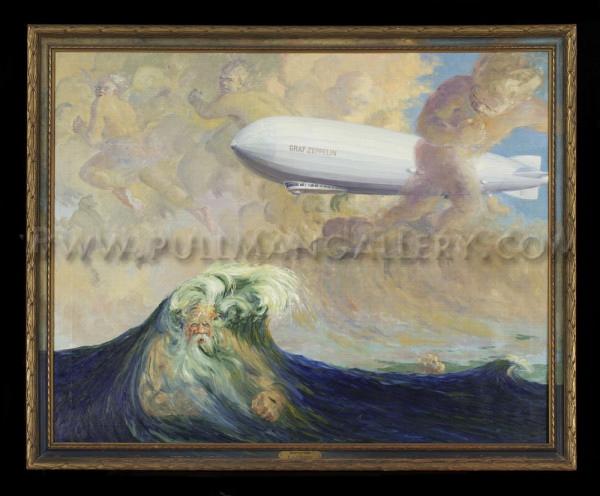