A very well observed original pen and ink drawing heightened with gouache of the Dieppe Grand Prix held on the 20th July 1935, showing the number 12 ERA of Pat Fairfield on his way to eventual victory ahead of ‘B Bira’ (Prince Birabongse of Siam) who came second in his ERA B, and Veyron in his Bugatti T51A, which placed third.

Framed in a gold leaf frame with mount and glazed.

Bryan de Grineau was resident artist for the Motor, a British automotive weekly, and was a contemporary (and some would say rival) to Frederick Gordon Crosby (1885-1943) who was working at The Autocar at around the same time. Due to the difference in print schedules (the Motor was published a few days ahead of The Autocar), de Grineau had to submit drawings of events quickly as the deadlines for weekend races were very tight. Drawings were done in the back of the pits, or on the sidelines while the race was still in progress. It is the dynamic nature of his sketches that give his artwork a distinct appeal, as if hurriedly trying to catch the moment, which he did. 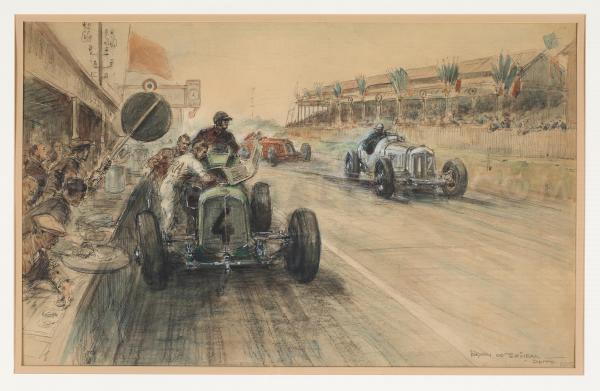