Realistically modelled as a QF 4.7 inch naval gun, as adapted for emergency field use during the Relief of Ladysmith and the Boer War 1900.

At the outbreak of the Boer War (1899-1902) British forces were quickly overrun. Famously besieged at Ladysmith, Kimberley and Mafeking, they had nothing to match the long range artillery of the Boer forces. Fortuitously for the British, the renowned gunnery Captain P. Scott RN was on board the HMS Terrible, at anchor off Cape Town. He quickly designed a carriage that could hold 4.7 inch, 6 inch and 12 pounder naval guns for field use, and a naval brigade was dispatched to Ladysmith, arriving in time for the start of the bombardment. The naval guns played a pivotal role in the campaign – the return of HMS Terrible in 1900 to Portsmouth saw the officers and men included in the national jubilation at the Relief of Ladysmith, culminating in a Royal Audience with a grateful Queen Victoria. 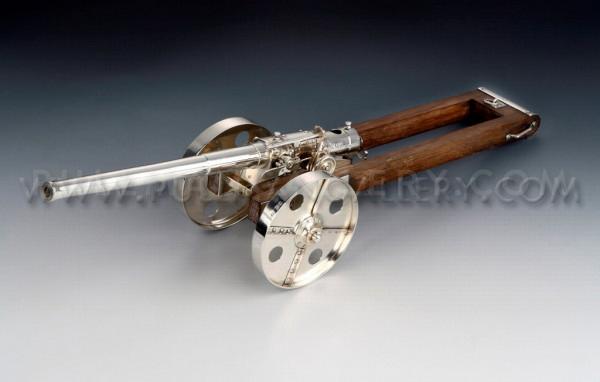