A magnificent billboard-size advertising poster created in 1948 for TWA, showing the world map with the continents ornately decorated with animals and indigenous people and the oceans overlaid with celestial figures, the routes of the airline highlighted, depicting the expansion in service after WWII. Backed on conservation grade linen and unframed.

Trans World Airlines (TWA) was originated in 1924, as Transcontinental & Western Air and operated a route between New York and Los Angeles. Becoming one of the ‘Big Four’ with American, United and Eastern, it was acquired by the legendary Howard Hughes in 1939 and after the the Second World War rolled out its service into Europe, the Middle East and Asia.

This poster, of monumental scale and created within Hughes’s stewardship of the company, given its size may have been used in an airport or travel agency, and is extremely rare. 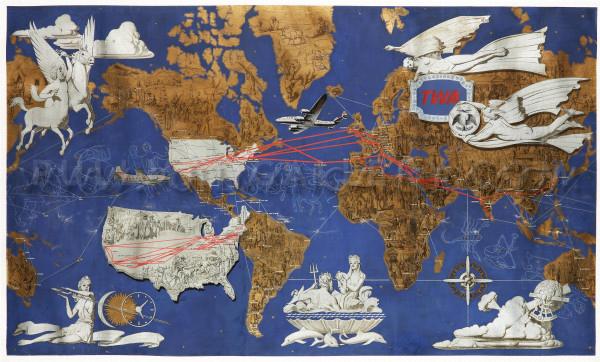