A magnificent bronze sculpture of massive proportions depicting a charioteer and horses at high speed, with all original patine to the bronze and signed GIRAUD RIVIERE to the sôcle, on original green marble plinth. French circa 1926.

Literature: ‘Art Deco and other Figures’ by Bryan Catley (1977).

Additional Notes: Maurice Guiraud-Rivière is one of the most highly regarded sculptors of the Art Deco period. Born in Toulouse in 1881, he studied at the Ecole des Beaux Arts in Paris and became a member of the Salon de Beaux Arts. He created a number of iconic Art Deco sculptures, including ‘Comète’ in 1925 and this, ‘Ben Hur’ in 1926. Inspired by the legendary Cecil be de Mille silent movie of 1925, ‘Ben Hur’ recalls the famous chariot race between Judah Ben Hur and his Roman nemesis, Marsalen, a centre-piece of both the 1925 and 1959 versions of the film .’Ben Hur’ was an important milestone in the history of cinema. In 1925, movie theatres were widely regarded in the United States as being akin to houses of ill repute, frequented by louche, disreputable people. The sheer quality and spectacle of Ben Hur – the first true ‘epic’ film – coupled with its biblical storyline, give it a respectability amongst the public resulting in many people visiting a movie theatre for the first time in order to see it. 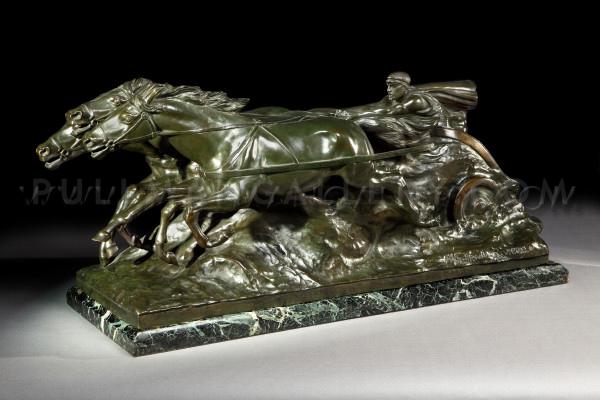